Multiple adalimumab (ADA) biosimilars are now available since they were first commercialized in 2019 after having proved their safety and effectiveness in rheumatoid diseases. However, real data in inflammatory bowel disease (IBD) remain scarce.
The main aim was to evaluate the remission rates after switching from ADA originator (Humira) to biosimilar (Hyrimoz) in a cohort of patients in remission at time of inclusion as well as to describe any safety issues.

We performed a prospective, observational cohort in a tertiary IBD referral centre.
All patients on Humira who were in clinical remission (defined as Harvey-Bradshaw score ≤4 or partial Mayo score ≤2) +/- biological remission (faecal calprotectin <250 μg/gr and C-reactive protein [CRP] <5gr/L) +/- endoscopic/radiologic remission at time of switch were included and followed-up for at least 9 months.
Data on IBD phenotype, CRP, ADA drug and antibody levels and faecal calprotectin were collected. 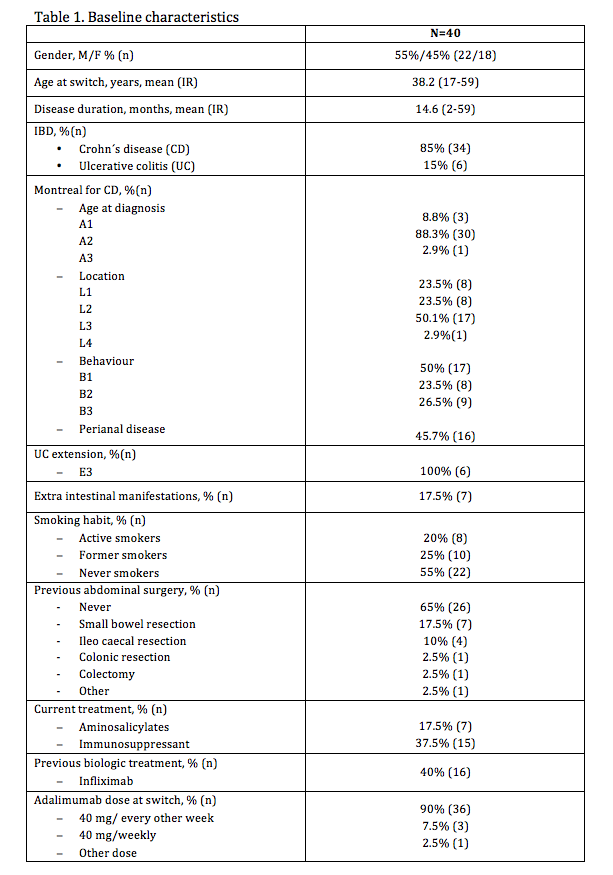 Switching from Humira to Adalimumab biosimilar appeared to be effective and safe with most patients being in clinical remission at the end of follow-up.  Statistical differences were found in adalimumab levels, CRP after switching and albumin, however, the impact of these differences was not noticeable.