The oral, small-molecule, selective and reversible Janus kinase inhibitor upadacitinib (UPA) is approved for the treatment of rheumatoid arthritis (RA), psoriatic arthritis (PsA), moderate-to-severe atopic dermatitis (AD) and ankylosing spondylitis, and is under investigation in ulcerative colitis (UC). This assessment reviewed adverse event (AE) data for UPA maintenance therapy in UC in the context of the known long-term safety profile of UPA in its approved indications.

Safety data were collated from patients with UC who responded to 8 weeks’ induction treatment with UPA 45 mg once daily (QD) and were enrolled in U-ACHIEVE to receive maintenance treatment (UPA 15 mg, 30 mg QD or placebo) for ≤52 weeks. Treatment-emergent AEs (TEAEs) were defined as AEs with an onset on or after the first dose, and ≤30 days after the last dose, of study drug. Safety data were also collected from two AD (15 and 30 mg doses), six RA (15 mg dose in all, 30 mg dose in four) and two PsA (15 and 30 mg doses) Phase 3 trials. Exposure-adjusted event rates were calculated for TEAEs and AEs of special interest (AESIs).

Data were available for 746 patients with UC who received 8 weeks’ induction with UPA 45 mg and were randomised to maintenance treatment as follows: placebo, n=245; UPA 15 mg, n=250; UPA 30 mg, n=251. Rates of any AEs, serious AEs, severe AEs and AEs leading to treatment discontinuation were lower with both UPA doses versus placebo (Table 1). No deaths occurred. Rates of the above AE categories in patients with UC who received maintenance treatment with UPA 15 or 30 mg were within the ranges previously reported in AD, RA and PsA, apart from neutropenia (Table 1). AESI rates in UC were generally similar with UPA and placebo, except for higher rates of herpes zoster, creatine phosphokinase elevation, hepatic disorder, and venous thromboembolism (VTE), but lower rates of anaemia, with UPA (Table 2). Non-melanoma skin cancer was reported only with UPA 30 mg. One adjudicated major cardiovascular event was reported in each of the placebo and UPA 30 mg arms. VTE only occurred with UPA treatment (two events per arm). Based on the limited number of patients exposed, and apart from a higher VTE rate, AESI rates in the UC maintenance study were generally similar to those reported in patients receiving long-term treatment with UPA 15 or 30 mg QD in AD, RA or PsA. 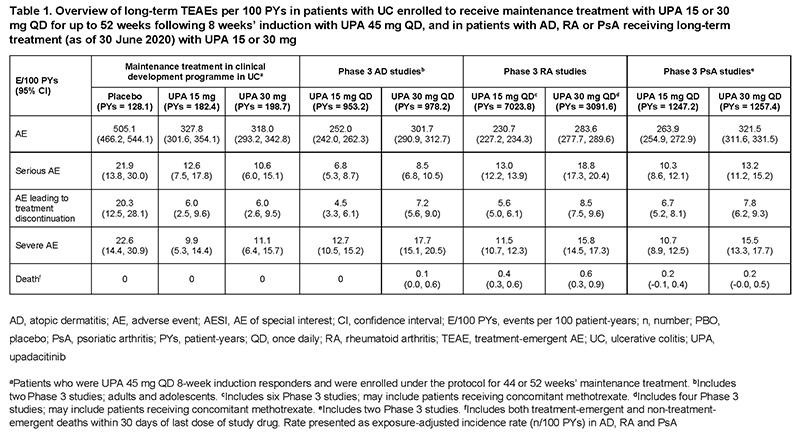 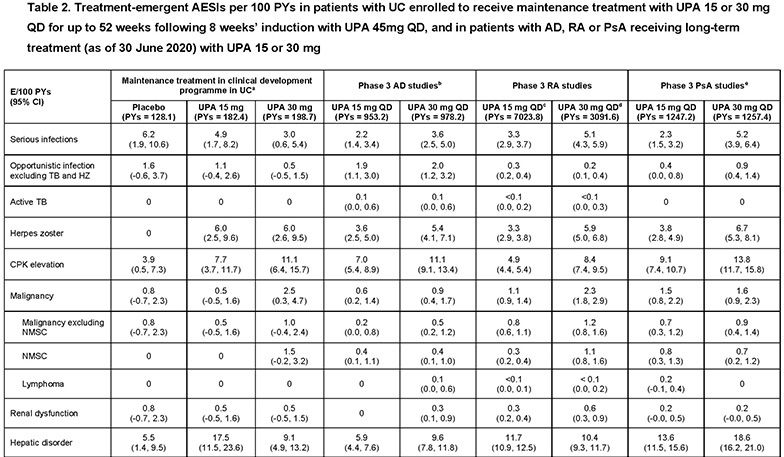 The safety profile of UPA maintenance treatment in UC is consistent with that in its approved indications. Although VTE rates were higher in UC, background VTE risk is known to be increased in UC versus AD, RA and PsA. This review identified no new important safety risks.