In recent phase 3 trials, risankizumab (RZB), a humanised monoclonal IgG1 antibody targeting the interleukin 23 p19 subunit, proved to be superior to placebo in inducing and maintaining clinical remission and endoscopic response in patients with moderate-to-severe Crohn’s disease. In this study, we aimed to evaluate the effectiveness and safety of RZB in a real-world cohort of multi-refractory CD patients.

Adult CD patients from six Belgian IBD centres who initiated RZB prior to May 2021 as part of a medical need program were prospectively followed. Patients with an ostomy were excluded for the main analyses. The primary endpoint was steroid-free clinical remission at week 24 (average daily liquid stool frequency [SF] ≤2.8 and average abdominal pain [AP] score ≤1, both not worse than baseline). Secondary endpoints included clinical response, endoscopic remission, endoscopic response, biological remission, biological response, need for CD-related hospitalisation or surgery, and serious adverse events (definitions in Figure 1). Given that a follow-up endoscopy has not yet been performed in some patients, results are shown for both “all patients” (with non-responder imputation) and “as observed”.

A total of 27 patients started RZB of whom 19 patients were eligible for this study with a minimal follow-up of 24 weeks (Table 1). Eight patients were excluded as they had an ostomy at time of RZB initiation. Eighteen patients (95%) had been exposed to more than 3 biologicals and 13 (68%) previously underwent a CD-related intestinal resection. By week 24, 7/19 (37%) and 7/19 (37%) patients achieved steroid-free clinical remission and endoscopic response, respectively (Figure 1). In the “as observed” analyses, these rates were 7/18 (39%) and 7/9 (78%), respectively (Figure 2). Five patients used concomitant steroids at baseline and were all able to stop it after a median of 10 weeks. Eventually, three patients had to be hospitalized for bowel resection (2 with placement of an ostomy) after a median of 24 weeks, two of them required earlier an emergent hospitalization due to flares of abdominal pain and bloody diarrhea. None of the patients experienced serious infections or intolerance. Based on physician global assessment, three out of eight patients with an ostomy did achieve clinical remission, and two other achieved clinical response. Endoscopic follow-up data were available in six patients, and three of them experienced endoscopic response. 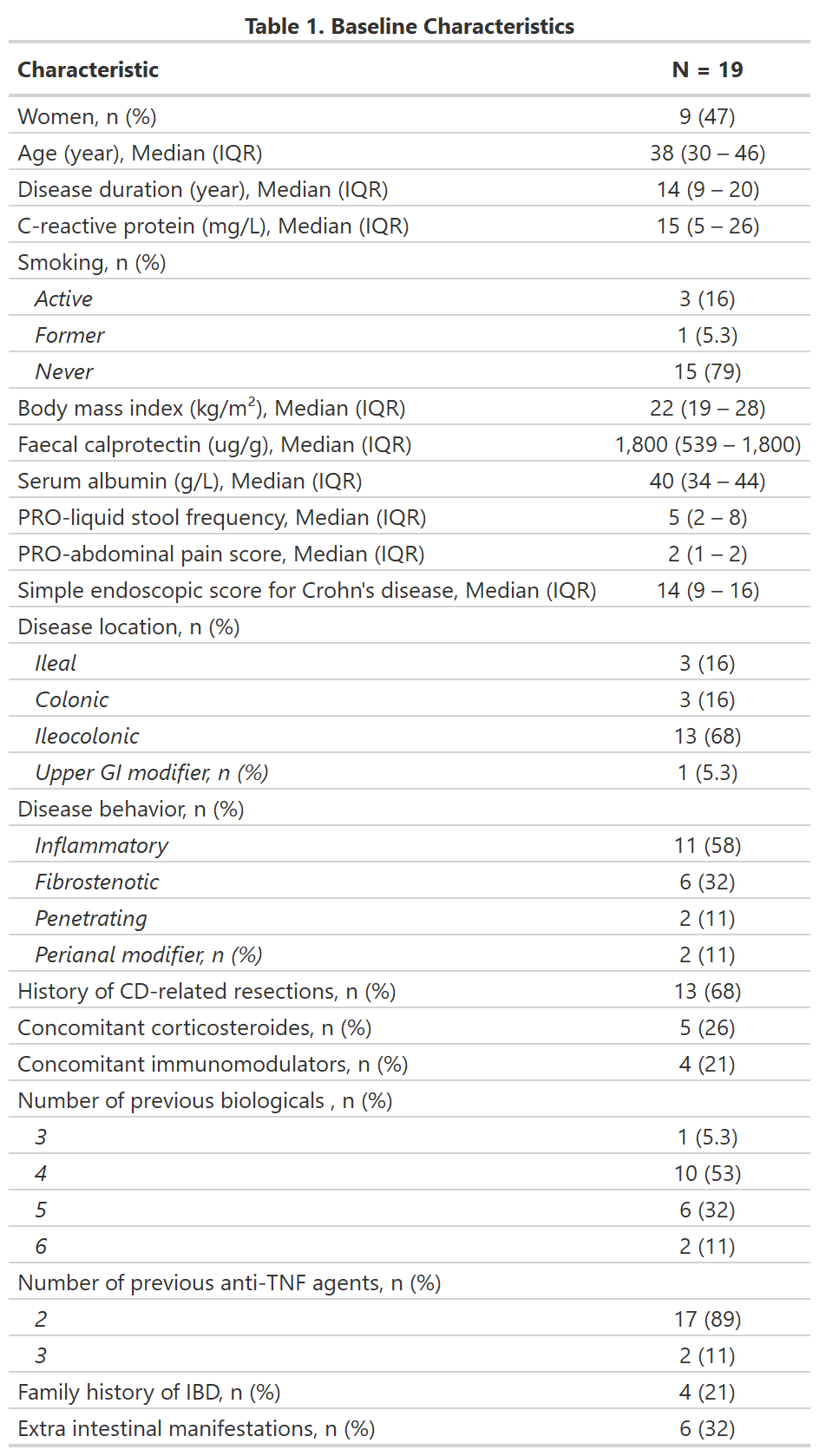 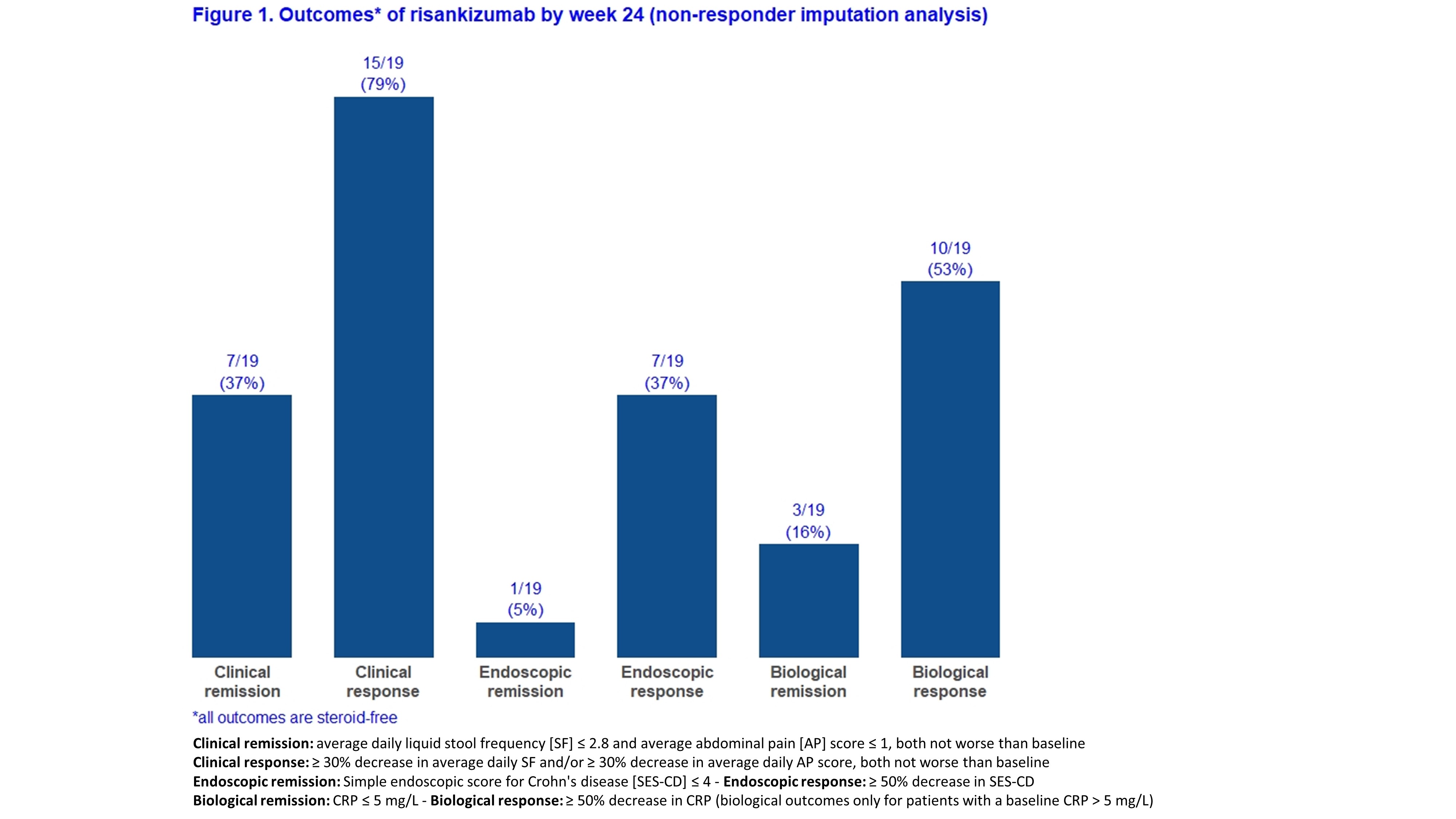 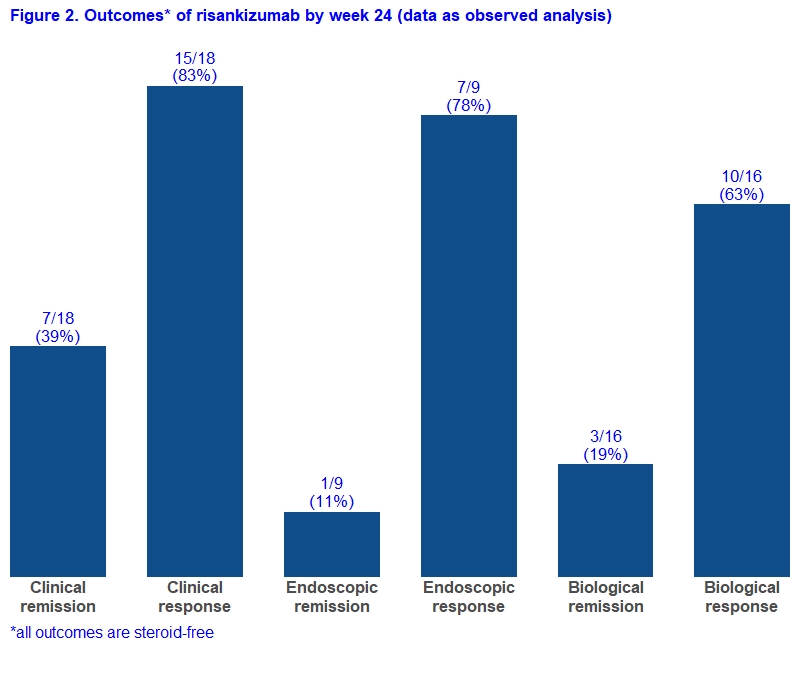 In this real-world, multi-refractory cohort, clinical remission and endoscopic response were both observed by week 24 in more than one third of CD patients initiating RZB. RZB was well tolerated with no safety issues.