We convened a 13-person voting panel of geographically diverse paediatric gastroenterologists alongside experts in RAND methodology, IBD surgery, haematology and nursing. Selective pertinent manuscripts were disseminated prior to the meeting. An online survey was sent to all panellists ahead of an online meeting. Panellists were asked to rate the appropriateness of thromboprophylaxis in hospitalised PIBD patients via clinical scenarios of varying ages, gender, and extent of ulcerative colitis (UC) and Crohn’s disease (CD) with and without RFs. Anonymised results were presented at the meeting. A second modified survey of 27 scenario-based statements was distributed to all panellists present at the meeting with three options each: offer no thromboprophylaxis; offer until discharge; offer until clinical remission.

The combined outcome of thromboprophylaxis being considered appropriate until discharge and inappropriate to withhold was seen in 20/27 scenarios, including all patients with new-onset ASC, irrespective of pubertal status or sex (Fig 1); all flares of known UC, irrespective of sex, or the presence/absence of RFs with the exception of pre-pubescent patients with limited disease and no risk factors (Fig 2); and CD patients with RFs, irrespective of pubertal status or sex (Fig 3). Thromboprophylaxis was always considered uncertain until clinical remission. Disagreement was only seen in 4/12 scenarios regarding CD without RFs where most options were also uncertain, particularly in those with limited ileal disease (Fig 3, * = DI ≥1). 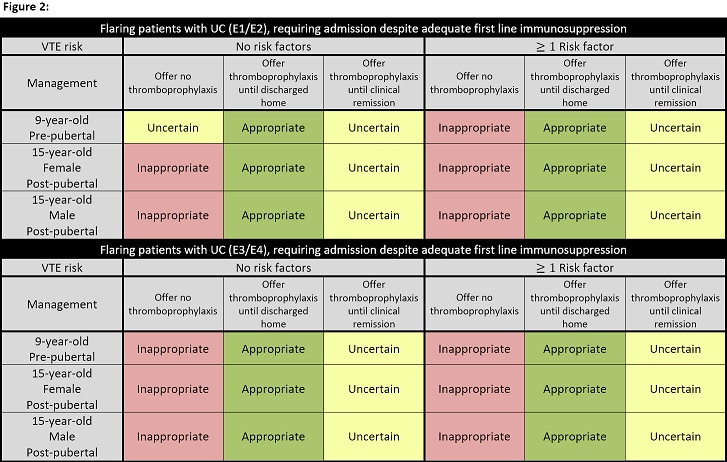 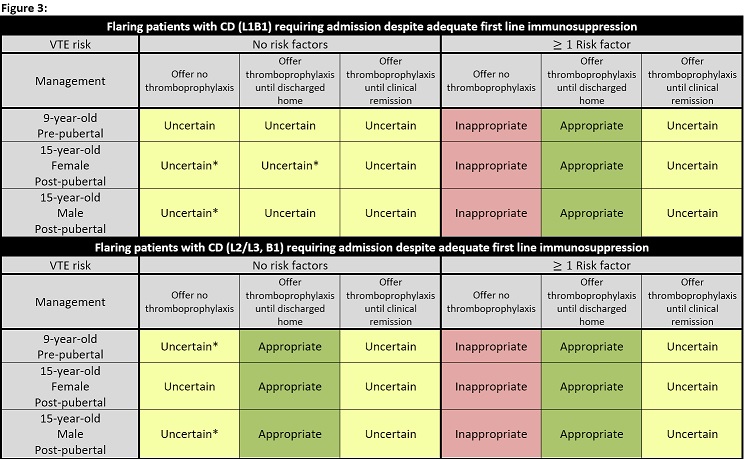 RAND panels are an established method to assess expert opinion in areas of limited evidence. This work therefore constitutes neither a guideline nor a consensus; however, the findings suggest a need to re-evaluate the role of thromboprophylaxis in the next iteration of PIBD guidelines. Specifically, thromboprophylaxis was considered appropriate until discharge in all patients with active UC, irrespective of RFs except in pre-pubescent children with limited disease. Thromboprophylaxis was considered appropriate in CD with RFs but there was uncertainty in CD without RFs, particularly in limited ileal disease.