Epidemiological data suggests Crohn’s disease (CD) runs a mild course in a third of patients. Furthermore, the AZTEC study demonstrated that 30% of patients with uncomplicated CD responding to initial therapy remain in clinical remission at one year when maintained by placebo (Gastroenterology 2013;145:766). There are no proven maintenance strategies other than immunosuppression in CD. ECCO does not recommend maintenance therapy in those newly diagnosed with uncomplicated disease achieving remission with steroids, however in the absence of prognostic biomarkers treatment decisions can be difficult, risking over treatment for some. This questionnaire aimed to explore clinicians’ prescribing strategies and attitudes toward patients with mild CD.

A questionnaire was devised in conjunction with the Y-ECCO and ClinCom committees and distributed to attendees to the 2021 virtual ECCO conference.

124 complete responses were obtained from gastroenterologists 54%, gastroenterology  trainees 29% with surgeons/nurses comprising most of the remainder. 61% respondents were from university hospitals, 33% general hospitals and 6% private clinics, 79% of whom practise in Europe.

Approaches to induction and maintenance of remission were investigated in ileocolonic and isolated colonic CD (table and figure). Budesonide and or systemic steroids are often used for induction of remission in both CD subtypes, however a range of therapeutics are also used, with only one respondent taking a wait and see approach in colonic but not ileocolonic CD. In both CD subtypes >50% of patients who achieve steroid-induced remission would be maintained using immunosuppression with either an immunomodulator or biologic, whereas 28% and 6% (ileocolonic) and 20% and 19% (colonic) would watch and wait/treat with 5-ASA respectively, representing significant variation in practise. 80% respondents felt development of complicated disease was unlikely in these patients, despite this, 60% would treat with maintenance therapy. 55% respondents felt that mild CD was easy to manage, however 45% felt neutral or negative towards managing mild CD; the management approach undertaken by either group of respondents was equally varied.

Current practise does not reflect ECCO guidance, likely due to uncertainties over the natural history of disease and the difficulty in predicting complications. Perception of the difficulty of managing mild CD did not appear to influence treatment decisions. Patients with mild CD comprise a significant proportion of our patients, yet management may be less clear cut than for aggressive disease and further work on risk stratification and management algorithms may avoid over-treatment of patients who may never develop complications. 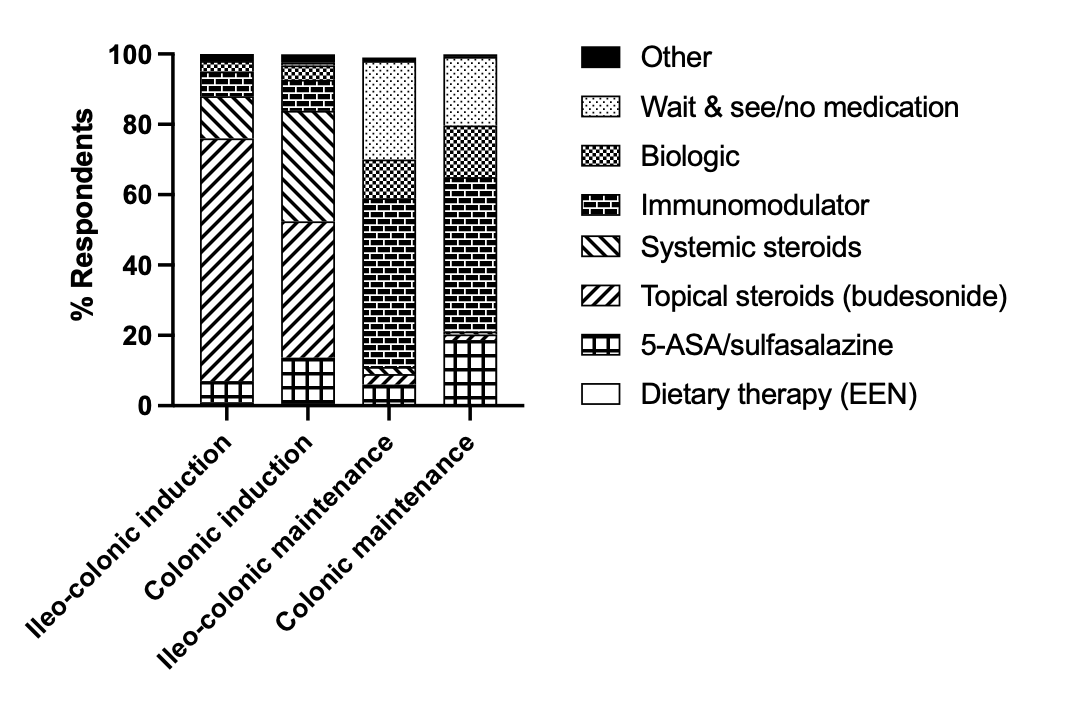