Denmark has one of the highest occurrences of inflammatory bowel disease (IBD) in the world, with reported incidence rates of 7.2 and 6.2 in paediatric ulcerative colitis (pUC) and 10 and 9.4 per 105 for girls and boys in Crohn’s disease (pCD). Incidence rates in adult patients have been reported to be 9.1 and 18.6 per 105 for ulcerative colitis (UC) and Crohn’s disease (CD), respectively. We aimed to evaluate the incidence and initial disease presentation of newly diagnosed paediatric and adult IBD patients in the Hvidovre and Herlev Hospital uptake areas, covering approximately 1.050.000 inhabitants, corresponding to ~20% of the Danish population.

During a 2-year inclusion period, all incident paediatric (≤18 years of age, pIBD) and adult IBD patients residing in the uptake area at the time of diagnosis are included in a prospective, multicentre, population-based inception cohort (IBD Prognosis Study). The study was initiated on May 1st, 2021. Patients are prospectively followed with regular intestinal biopsies, stool-, serum-, and whole blood samples to analyze biomarkers, microbiome and genetic profiles at predefined time points. Demographics and disease-related characteristics were collected at diagnosis. Incidence was defined as the number of new IBD cases during May 1st – October 31st divided by the total inhabitants covered in included sites during the same period.

A total of 125 IBD patients were included during the initial six months (table 1). For paediatric patients, the incidence rates were 8.2 and 16.4 per 105 for pUC and pCD. Adult incidence rates were 19.4, 17.0, and 2.4 per 105 for UC, CD and IBD-unclassified (IBD-U), respectively. At diagnosis, extraintestinal manifestations were present in 15% of paediatric and 36% of adult patients. In paediatric patients, 20% and 0% of pUC and pCD had moderate to severe disease activity at diagnosis, based on PUCAI- and PCDAI scores. In adults, 33%, 50% and 50% of UC, CD and IBD-U patients had moderate to severe disease activity at disease onset based on SCCAI- and HBI scores. More extensive disease and increased faecal calprotectin were associated with more severe disease activity in adult UC. CRP correlated positively, while haemoglobin and albumin correlated negatively with UC disease extension.

The IBD incidence rates in paediatric and adult patients continuously increase in Denmark, thus constituting a substantial burden for the Danish health care system. A large proportion of patients presented with significant symptoms and future findings of this cohort will potentially bring us a better understanding of the heterogeneous course of IBD, including the differential need for, and response to, treatment. 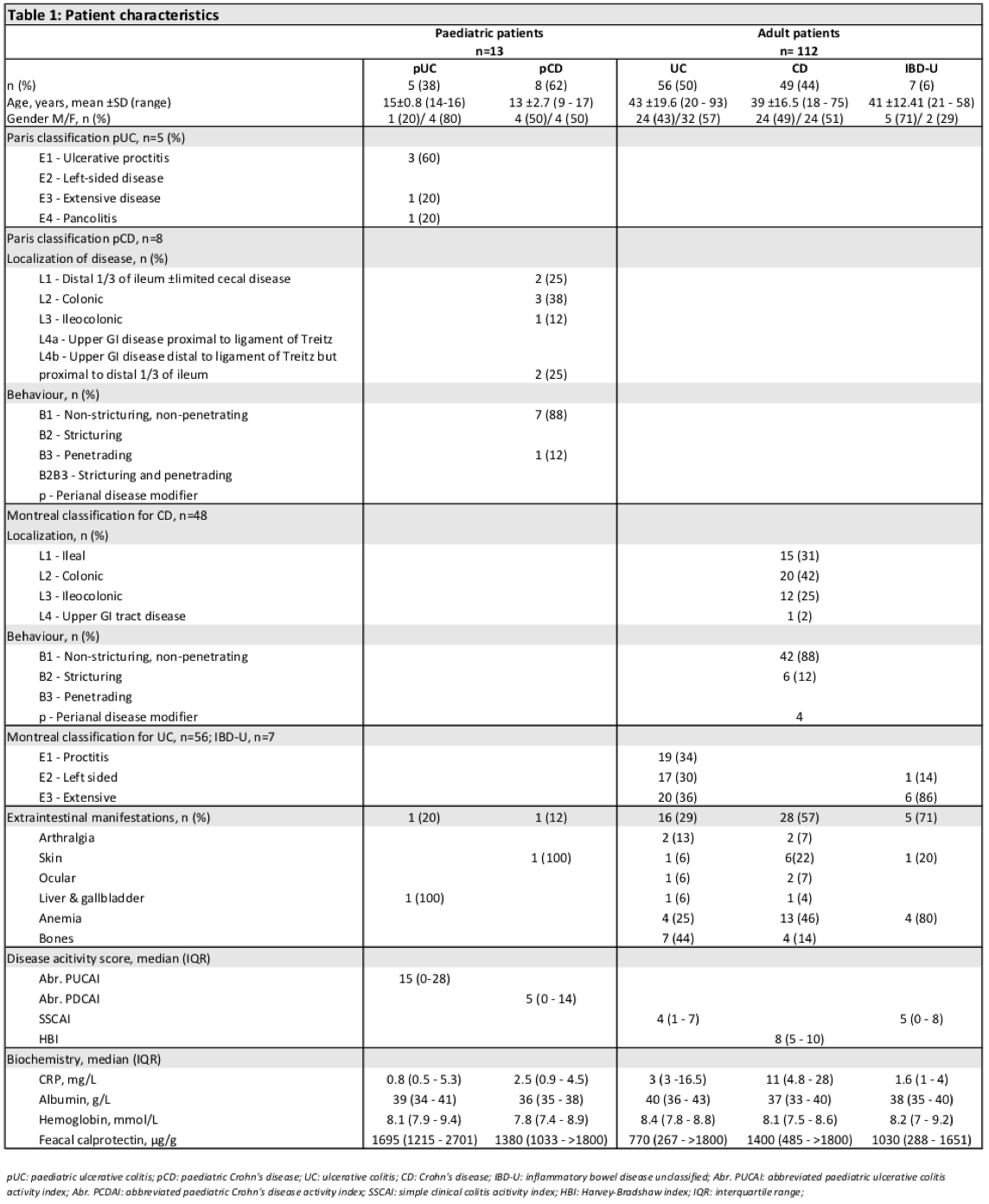