Several observations suggest that immunomodulators (IMMs) and anti-TNFα agents can affect long-term clinical course of Crohn’s disease (CD). However, no convincing surgery-sparing direct effect of these medications has been demonstrated in large population-based studies. Failure to optimize these treatments, particularly a limited use in early disease course, may explain the underperformance of these strategies in the clinical practice setting. Early introduction of IMMs/anti-TNFα in CD after surgery, either as prevention of recurrence or as treatment of early endoscopic recurrence, has become a common clinical practice and may represent a surrogate model of early treatment.

The aim of the present study was to evaluate the impact of IMMs/anti-TNFα on the long-term post-operative course after ileocaecal resection in CD patients.

All adult CD patients who underwent their first ileocaecal resection at three major referral Centers in Rome were retrospectively reviewed.

Demographic and clinical characteristics were recorded: gender, age at the time of surgery, CD behaviour (penetrating or non-penetrating), previous treatment with IMMs/anti-TNFα, and time to prescription of IMMs/anti-TNFα after surgery.

The primary endpoint was the need for second resection.

surgery: cohort 1 (1980-1998; n.198); cohort 2 (1999-2009; n.218); cohort 3 (2010-2020; n.241).  The mean follow-up after surgery was 83+41 months. The cumulative probability of receiving IMMs/anti-TNFα after surgery was significantly different between the three cohorts but the probability of a postoperative course free from reoperation was not (figure). In the multivariate analysis, treatment with IMMs/anti-TNFα prior to the first resection (HR 9.15; 95%CI 2.77-30.21) and post-operative therapy with IMMs/anti-TNFα (HR: 0.24; 95%CI 0.07-0.74) were associated to the risk of reoperation. However, these associations had a time-varying effect and become not significant after 5 and 2 years after surgery respectively.  Overall, 283 patients received IMMs/anti-TNFα at any time after surgery. Comparing early treatment (within 1, 2 or 3 years after surgery) with late treatment, no difference was observed in the cumulative risk of reoperation within 10 years 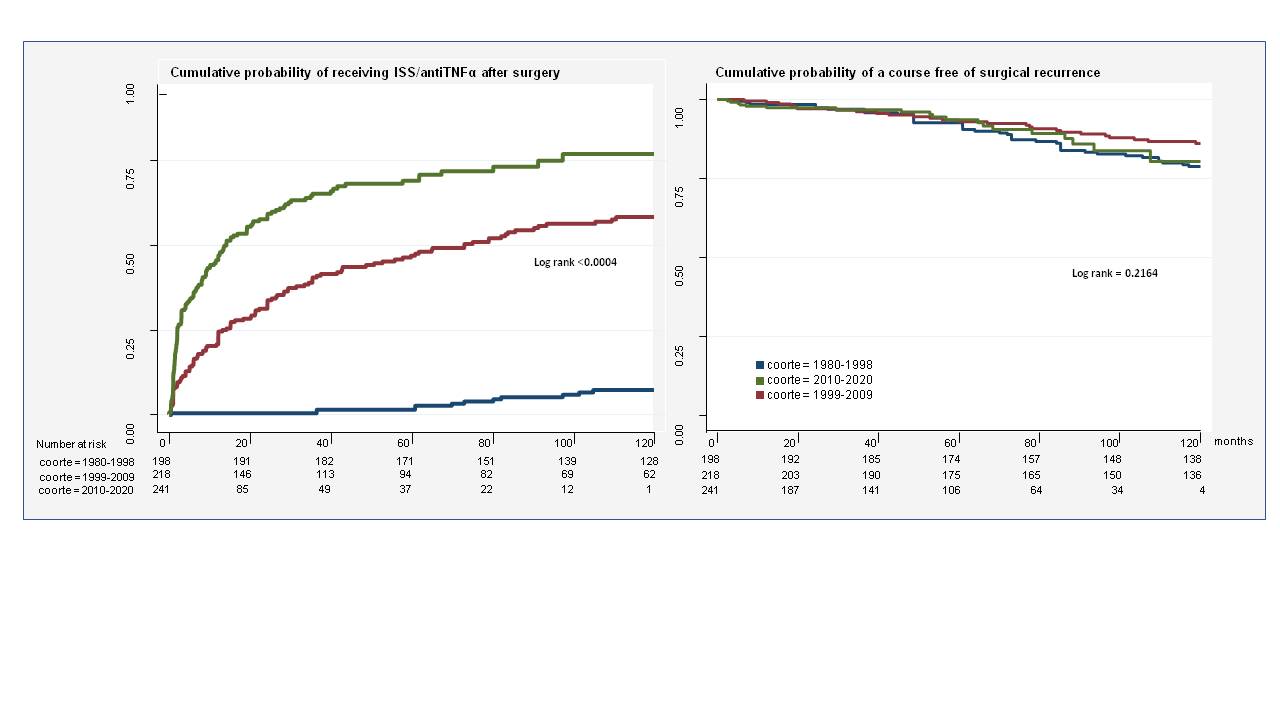 The increasing use of IMMs/anti-TNFα agents in the post-operative setting may have little impact on the long-term reoperation rate.