IBD has been shown to increase the rates of anxiety and depression amongst diagnosed individuals, with a prevalence rate of approximately 15- 20%. Chronic diseases such as IBD can have a significant impact on productivity at work (presenteeism). This can lead to emotional distress, poor quality of life and cost effects on employers. The primary aim of the study was to assess the prevalence of psychological problems, exercise levels and presenteeism at work among IBD patients. 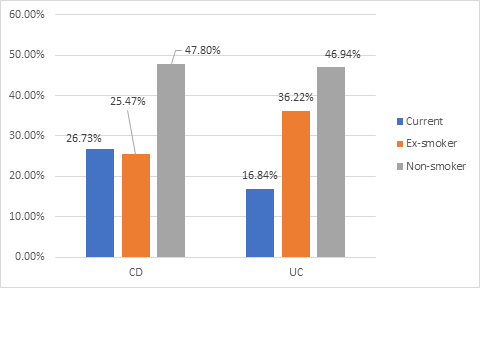 10.9% of patients had a diagnosis of depression/anxiety prior to the diagnosis of IBD, whereas this increased to 20.6% post-IBD diagnosis, this being significantly commoner in the CD cohort (23.0%, p<0.05) and in females (55.8%, p<0.05). 37.7% of patients had been to a psychiatrist or a psychologist (41% of CD, p<0.05) with 11.7% of patients being on psychiatric medication (14.5% of CD, p<0.05).
Low presenteeism at work was evident in 34.7%, with no statistically significant difference between UC and CD patients (p=0.5). 39.9% had a Godin Exercise Score being in the active range, 38.8% had a sedentary/insufficient exercise score. The rest were moderately active. Patients diagnosed with depression/anxiety had a more sedentary lifestyle. 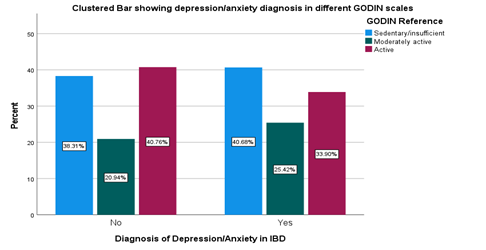 In our study 37.7% of patients were referred for psychological help. This can have several effects including poor presenteeism at work (34.7%) and reduced efficiency. These issues are commoner in patients with CD than in UC. Active involvement of a psychologist/ psychiatrist as part of the IBD team should be routine as to improve the patient's quality of life.