P647 Awareness, knowledge and use of mesenchymal stem cells – a global survey among gastroenterologists and colorectal surgeons

This study aimed to understand awareness, knowledge, and perception of mesenchymal stem cells (MSCs) among physicians, with particular focus on the complex perianal fistula (CPF) in Crohn’s disease (CD) indication.

A cross-sectional, web-based survey of currently practicing and registered gastroenterologists (GIs) and colorectal surgeons (CRs) across 15 countries in North America, Europe and Asia Pacific was undertaken. Descriptive analyses of data on awareness, knowledge, and perception of MSCs, willingness to use them in clinical practice and potential concerns were conducted overall and by medical specialty. Missing responses were allowed, thus denominators differed among questions (N values reported throughout). Multivariable logistic regression was used to examine factors associated with moderate/strong awareness of MSCs.

Among the aware physicians, the majority were moderately/largely interested in MSCs (87%, N=113), were willing to use them for patients with CD and CPF (82%, N=108) and believed MSCs address an unmet need for these patients (93%, N=101). However, there was a marked heterogeneity as to the assumed definition and mechanism of action (MoA) of MSCs (Figure 1). By specialty group, more CRs (50%) than GIs (31%) defined correctly MSCs as an immunomodulatory therapy. 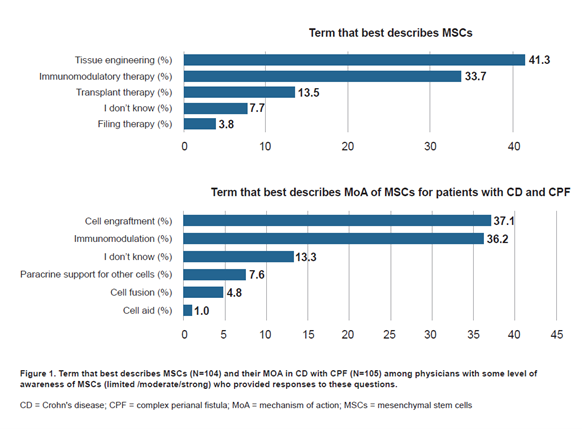 The majority of the physicians aware of MSCs stated that they have limited/no knowledge of this therapy (64%), its efficacy (51%), safety (53%) and MoA (65%) in patients with CPF in CD (N=105 for all questions). Many physicians (46%; N=107) also expressed concerns about using MSCs in these patients.

In physicians with concerns, long-term efficacy, long-term safety, and cost were the most frequently reported concerns, both overall (Figure 2) and by each specialty group (data not shown). 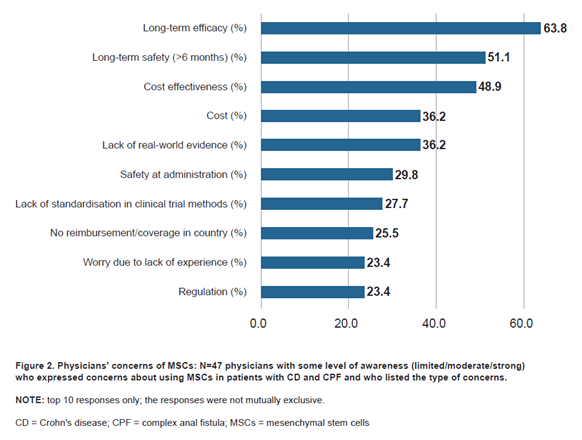 The multivariable logistic regression showed that attendance at discussions or presentations on MSCs in the past 2 years (p<0.0001) and seeing more patients with CD per year (p=0.0002) were associated with increased awareness of the therapy.

In this study, the majority of physicians demonstrated interest and willingness to use MSCs in clinical practice. However, the survey showed a perceived lack of knowledge of what MSCs are and how they work in patients with CPF in CD. This may explain physicians’ concerns about using MSCs in this indication. Increased communication and education regarding MSCs are required to alleviate physicians’ concerns and increase the uptake of this therapy in routine practice.