Active inflammatory bowel disease (IBD) at conception is associated with adverse pregnancy outcomes. Published literature suggests that almost a quarter of women with IBD do not use any form of contraception putting them at risk of unplanned pregnancy. Recent guidelines emphasise the importance of antenatal care in IBD patients, but contraception counselling and risk assessment are not addressed. Our aim was to explore the contraceptive knowledge, attitudes and preferences of women with IBD.

Of the 245 participants (see table 1), mean disease duration was 6.5 years, median IBD control score was 16.9 (range 0- 26), and 152 (62%) respondents had previously been pregnant. Almost three quarters of respondents (n=176) reported currently using contraception, and 41 (17%) were using highly effective contraceptives. The most commonly used contraceptives were oral birth control pills (27%) and barrier methods (18%). Participants who identified as Caucasian (74%) were more likely than those who identified as Asian (37%) to use contraception (p=0.0009).  Patients who did not plan to conceive in the future were more likely to use contraception (p=0.0365). However, of the 58% (n=143) who had either no plans to conceive in the future or were unsure, 23% were not using any form of contraception, and 83% were not using a highly effective contraceptive. Current biologic therapy was significantly associated with highly effective contraceptive use (p=0.0275). Contraceptive features most important to women were effectiveness (78%), ease of use (76%), few or no side effects (68%) and not detracting from sexual enjoyment (65%). Only 25% patients (n=61) recalled discussing reproductive issues with their IBD clinician, however, 86% stated they would feel comfortable having this discussion. Women wished to receive family planning counselling from their IBD nurse (81%), General practitioner (77%), IBD doctor (68%), and gynaecologist (47%). 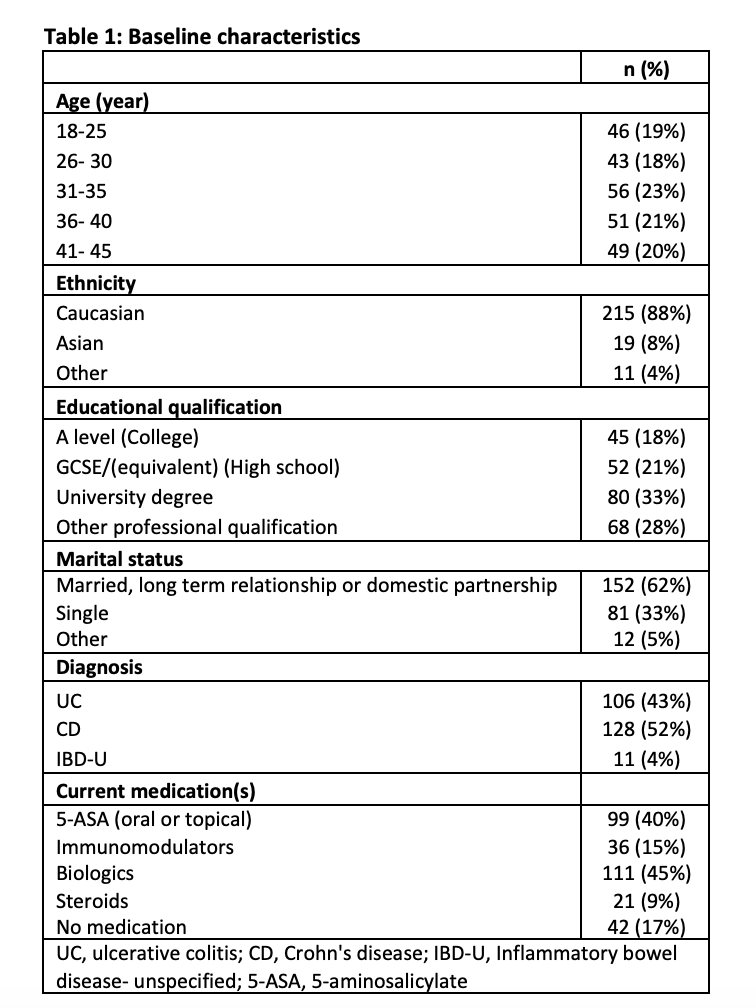 A quarter of patients in our cohort were not using any contraception and the majority were not using a highly effective form potentially increasing their risk of unplanned or mistimed pregnancy. Participants desired a contraceptive that was effective, easy to use and with minimal side effects. Our findings reflect the need for further studies to improve informed decision making with contraceptive counselling, to improve the overall quality of care for women with IBD.