Vitamin D has been implicated in the pathogenesis of inflammatory bowel disease (IBD), suggested by a geographical north-south gradient in risk for IBD. IBD patients have also been shown to have lower 25(OH) vitamin D (25(OH)D3) compared to healthy subjects. In contrast, prospective studies on pre-diagnostic samples, including one with late-onset IBD (n=241), have not found any differences. The aim of our study was to study 25(OH)D3 levels in subjects later developing IBD, including late-onset cases.

In this nested case-control study, 171 individuals who later developed IBD and 337 controls (matched for age, sex, and time and place for inclusion) were included. The study population was included from the Northern Sweden Health and Disease Study (NSHDS), and the Northern Sweden Maternity Cohort (RUB). Both with the catchment area being above latitude 63°N (based in Umeå, Sweden). 25(OH)D3 concentrations were analysed with LC-MS/MS on plasma collected at least one year before IBD diagnosis and compared between cases and controls using conditional logistic regression.

Results are shown in tables 1-3. Baseline characteristics are presented separately for NSHDS (Table 1) and RUB (Table 2). For NSHDS and RUB cases, median ages were 50.1 and 25.3 years respectively, and median 25(OH)D3 levels 52.9 and 52.3 nmol/L respectively. There were no differences compared to matched controls. Conditional logistic regression (Table 3) for vitamin D levels and risk for developing IBD were made for NSHDS and RUB separately and combined. It was also made separately for Ulcerative Colitis and Crohn’s disease. No differences were shown for the whole group, nor for any of the subgroups.

In pre-diagnostic samples, 25(OH)D3 did not differ between those who later developed IBD and controls. In subgroup analysis separately for RUB (including younger, female individuals) and NSHDS (including late-onset IBD), no differences were seen in either subgroup. This study supports previous findings indicating that vitamin D is not associated with the risk of developing IBD, including late-onset IBD, and that there is no evidence for early malabsorption of vitamin D. 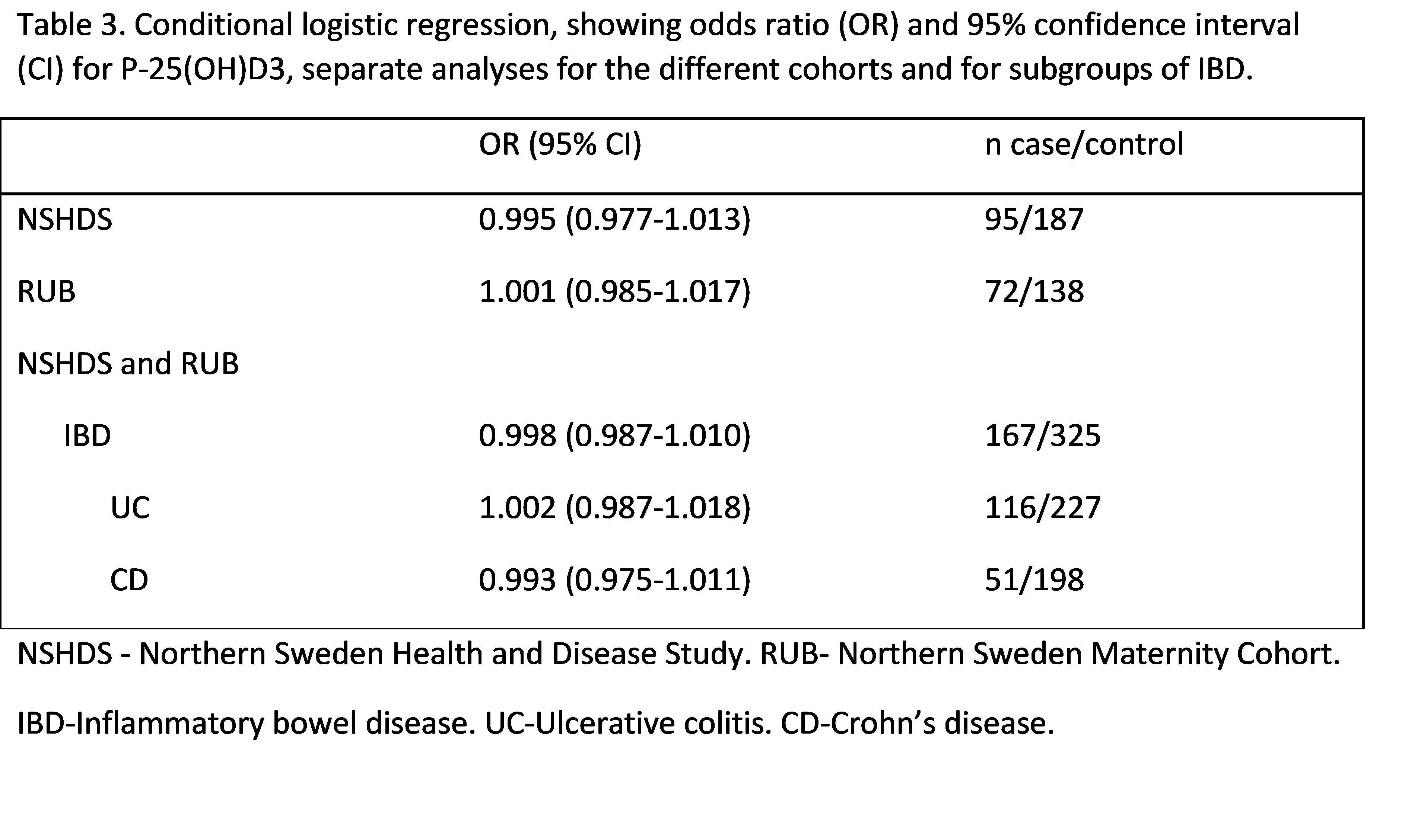