P662 Colorectal Cancer in Patients with Ulcerative Colitis: A National Cohort Study between 1991-2020

Studies on the colorectal cancer (CRC) risk in patients with ulcerative colitis (UC) show conflicting results. The aim of the current study was to assess if there is an indication shift for surgery in patients with UC from refractory disease to malignant degeneration over the last 3 decades.

From the nationwide Dutch Pathology Registry (PALGA), pathology excerpts from all patients with histologically confirmed UC who underwent a colorectal resection for all indications between January 1st, 1991 and November 12th, 2020 were included. The primary outcome was the CRC rate in the colon specimens. Outcomes were compared between 3 time periods (P1: 1991-2000, P2: 2001-2010, P3: 2011-2020). 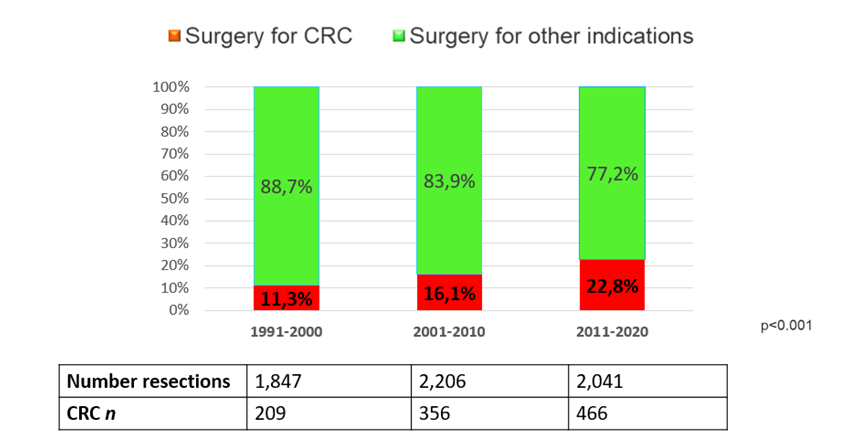 This nationwide pathology study demonstrated an increased surgical indication rate for CRC in UC patients over the last 3 decades. We hypothesize that the expanding therapeutic armamentarium for UC likely leads to exhausting medical options and hence postponed colectomy. This however, might be at the expense of increased risk of CRC in the long term. Despite the introduction of surveillance programs, the incidence of  advanced colon carcinoma remains high.