Since inflammatory bowel disease (IBD) patients were excluded from vaccine authorization studies, limited knowledge exists regarding perceptions for and unfavorable effects of COVID-19 vaccination in this group. The aim of this study was to investigate the real world use and adverse events (AE) of vaccines against COVID-19 in IBD patients.

Fully vaccinated IBD patients followed in Greek centers were invited to participate in an anonymous online self reporting survey that included information regarding their demographics, clinical characteristics, treatment, vaccination perceptions and potential AEs. Patients were vaccinated with either messenger-RNA or viral vector vaccines that are currently EMA approved.  AEs were stated as any kind of new symptom or sign onset, including localized (at the injection site) or systematic ones (fatigue, headache, allergic reactions, fever, lymphadenopathy, myalgias/arthralgias and gastrointestinal disorders).

A total of 1007 IBD patients [male 50.5%, median age (IQR) 44 (35-55) years, Crohn’s disease 64.3%, history of COVID-19 infection 2.6%] who completed the survey after they have fulfilled their vaccination program were included. Detailed demographics and clinical characteristics of the study population are presented in Table 1.

More than half of the patients (51%) stated that they show confidence in vaccination whereas the rest although reluctant/hesitant admitted the protection it offers. The median (IQR) time between 2nd vaccine dose and questionnaire completion was 15 (5-43) days. There were no serious AEs leading to emergency room visit or hospitalization. Total AEs were reported by 81% after dose 1 (D1) and 76% after dose 2 (D2), reduced to 44% and 51% when excluding isolated injection site reactions respectively. Systemic AEs were more common after D2 (P<0.0001). Very few patients reported new onset abdominal symptoms [abdominal pain 4% (D1), 6% (D2) and diarrhea 5% (D1), 7% (D2)].

In the multiple regression analysis AE occurrence was positively associated with young age and female gender after both doses, whereas inactive disease was negatively associated with AE only in D1 (p=0.044). No association with the use of medications including advanced therapy was found (p>0.05), except from corticosteroids after D2 (p=0.003) but it was a small (32/1007 patients) heterogenous (monotherapy, double or triple immunosupression) sample to draw conclusions. 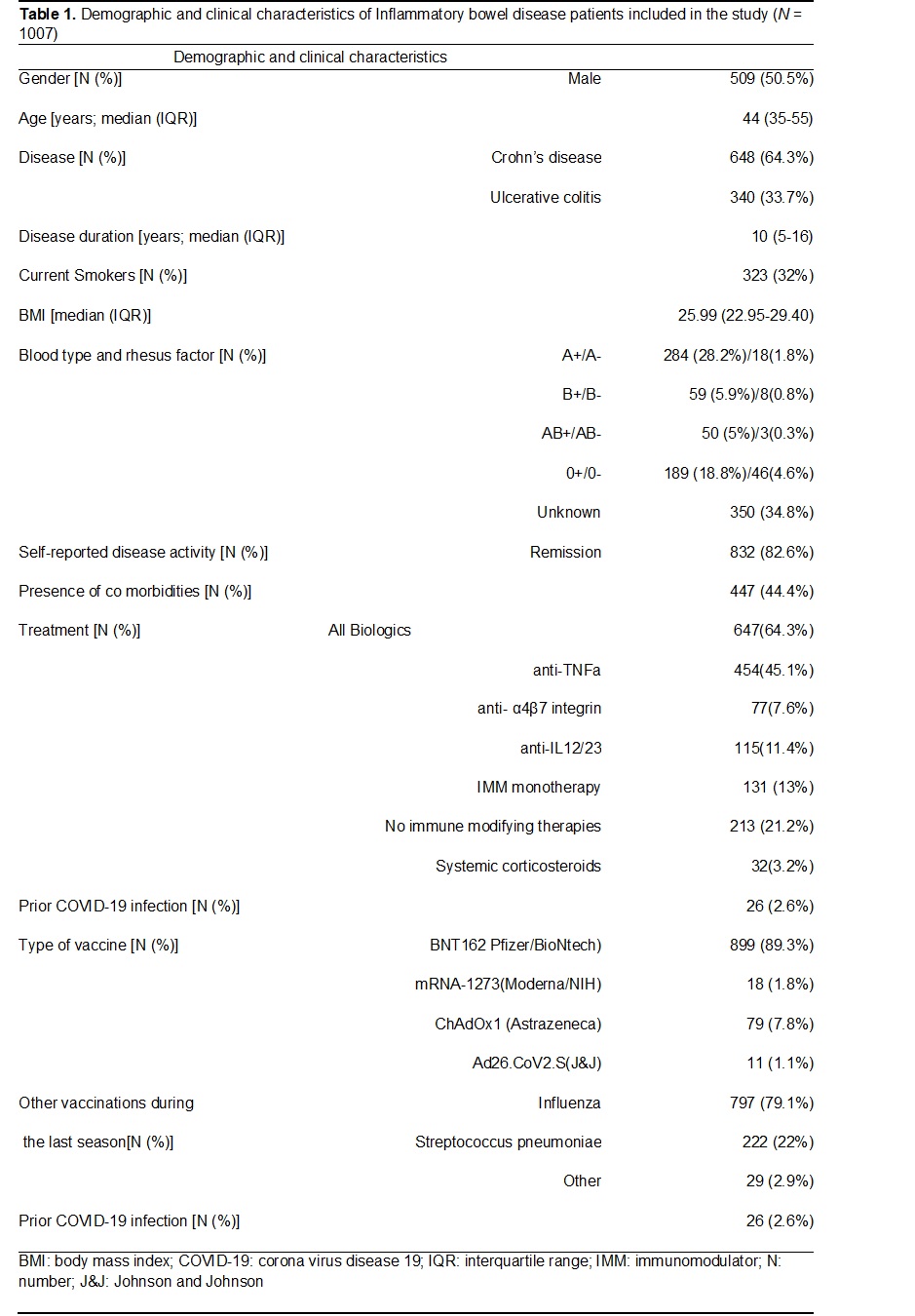 The presence of SARs-CoV-2 vaccination AEs in Greek patients with IBD is similar to the reported in other populations. Young age and female gender but not IBD related medications are associated with the development of AEs after both doses.