In addition to development of complicated disease behavior itself, children with Inflammatory Bowel Disease (IBD) are at risk of several complications, including malignancies, severe sepsis, or venous thrombosis, which can ultimately even cause death. Due of the rareness of these events, little evidence exists on underlying causes and risk factors, and little experience with these events in clinics hampers development of management guidelines.

In the ongoing international PIBD-SETQuality Safety Registry, participating paediatric gastroenterologists monthly completed an electronic survey since September 2016. In this survey, they indicated whether or not they had seen any predefined rare and severe complication of paediatric IBD (PIBD) or related treatment in a PIBD patient <19 years. In an annual denominator survey, participants also reported the number of PIBD patients under their care. Together with the duration of participation, this number was used to calculate incidence rates of each complication in the registry. Upon report of a complication, specific follow-up forms were sent, collecting patient demographics, complication details (diagnostics, management, outcome) and IBD details (Paris classification, disease severity, IBD treatment).

From September 2016 to October 2021, the registry reached an all-time number of 222 participants. Currently, 139 paediatric gastroenterologists actively report from 127 international pediatric IBD centers in 30 countries, covering a total of 23,239 PIBD patients. The average duration of participation per center was 39.7 (IQR (29 – 55) months, resulting in a total study population of 65,099 patient-years. In total, 245 complications were reported, including 78 classified as other rare and severe complications (Figure 1). Incidence rates for some complications (e.g. renal failure, venous thrombosis, opportunistic infection) were relatively increased, while other complications, (e.g. hemophagocytic lymphohistiocytosis (HLH)) were rare. Among reported malignancies were Hodgkin lymphoma (n = 6) and hepatosplenic T-cell lymphoma (n = 2). Causes of death were IBD-related in 73% of cases and included cancer (n=2), cerebrosinus venous thrombosis (n=2) and severe sepsis (n=2).

After 5 years of international collaboration of more than 200 PIBD specialists, the Safety Registry project has confirmed several complications in PIBD have increased incidence over the general paediatric population. HLH and HSTCL were rarely reported. Clinical phenotyping of patients has resulted in better understanding of underlying aetiologies and outcome of complications. Ultimately, in partnership with PIBD experts, this project will develop and share management guidelines to improve patient care. 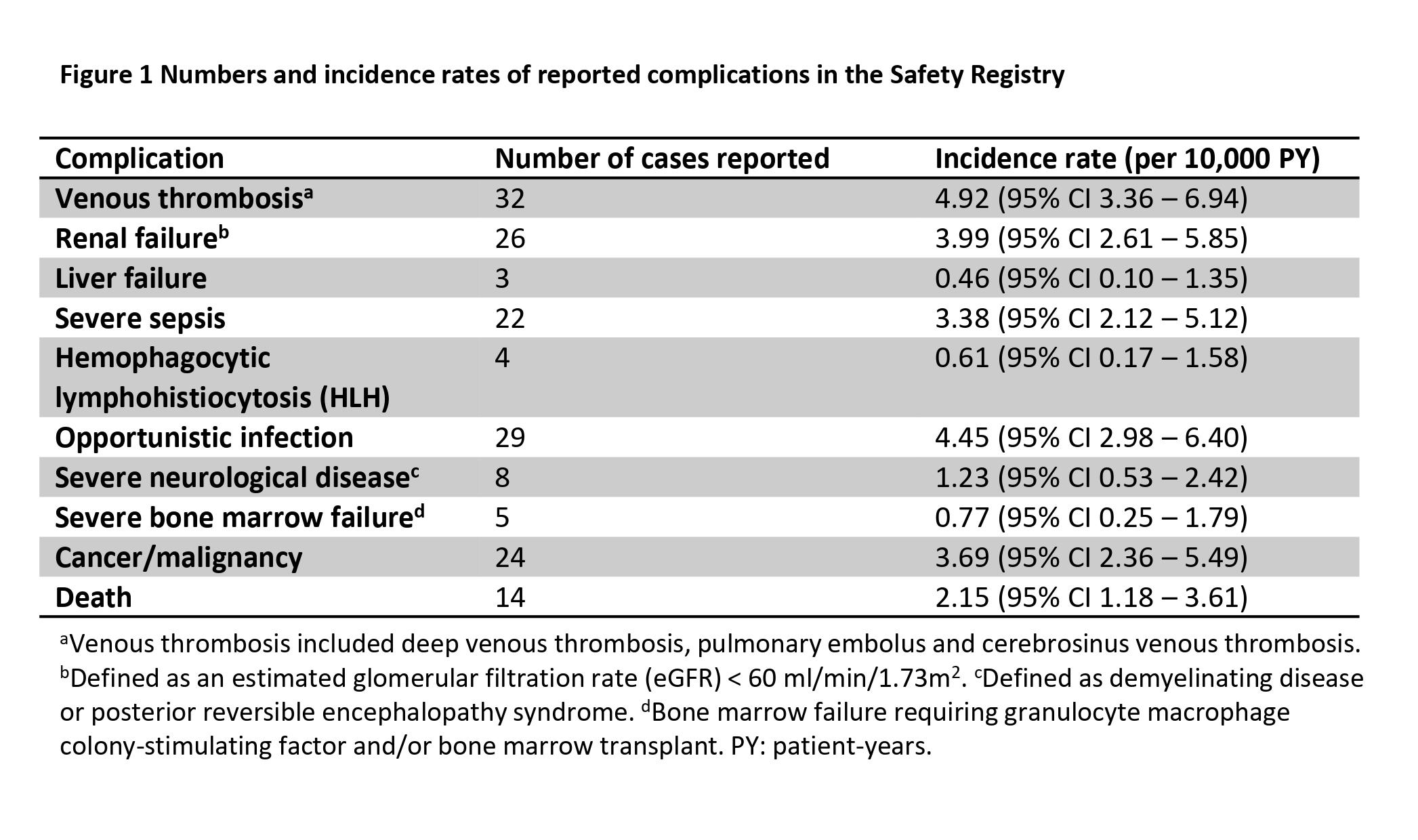