Faecal samples were collected from 88 monozygotic (MZ) and dizygotic (DZ) twin pairs concordant or discordant for Crohn’s disease (CD; 26 MZ; 19 DZ) or ulcerative colitis (UC; 16 MZ; 27 DZ). The 16S rRNA gene was sequenced and amplicon sequence variants (ASV) generated. ANCOM software was used to assess differences in IBD vs. non-IBD, stratifying by disease type (CD/UC) and adjusting for age, gender and smoking. Twin pair and zygosity were added as random effects to estimate familiality, defined as percentage of variation due to common environment and genetics. IBD-affected twins were used for differences in disease location or treatment. Participants reporting antibiotic/probiotic treatment within the last 3 months or with a stoma/pouch were not included. In UC, surgery-naive patients were compared to an excluded subset who underwent ileostomy or pouch surgery without any recent antibiotic courses.

Disease concordance in MZ twins was higher in CD (54%) than UC (19%). Alpha diversity was lower in CD, but not UC, and in ileostomy and pouch vs. surgery-naive UC. Principal component analysis showed that CD-affected twins clustered apart from non-IBD ones (Figure 1A). Familiality was lower in CD, with 5% of ASVs having familiality > 50%, compared to 17% in UC (Figure 1B). Two Lachnospirales order ASVs were less abundant in UC, while 15 ASVs from Clostridia, Bacteroidia, Bacilli and Coriobacteriia classes differentiated CD from non-IBD. Firmicutes were higher in CD (β= 0.95; 95%CI [0.34,1.56]), while no phyla changed in UC. Veillonella, Barnesiella, Faecalimonas and Holdemania genera had opposite trends in ileocolonic or colonic CD vs. ileal, and two Clostridia ASVs were lower in extensive and left-sided UC. Gemmiger and Butyricicoccus_A genera were reduced in UC patients taking aminosalicylates compared to untreated. No treatment differences were found in CD. Patescibacteria was higher in ileostomy and Verrucomicrobiota in pouch, while Bacteroidota and Firmicutes_A were lower in both surgeries. 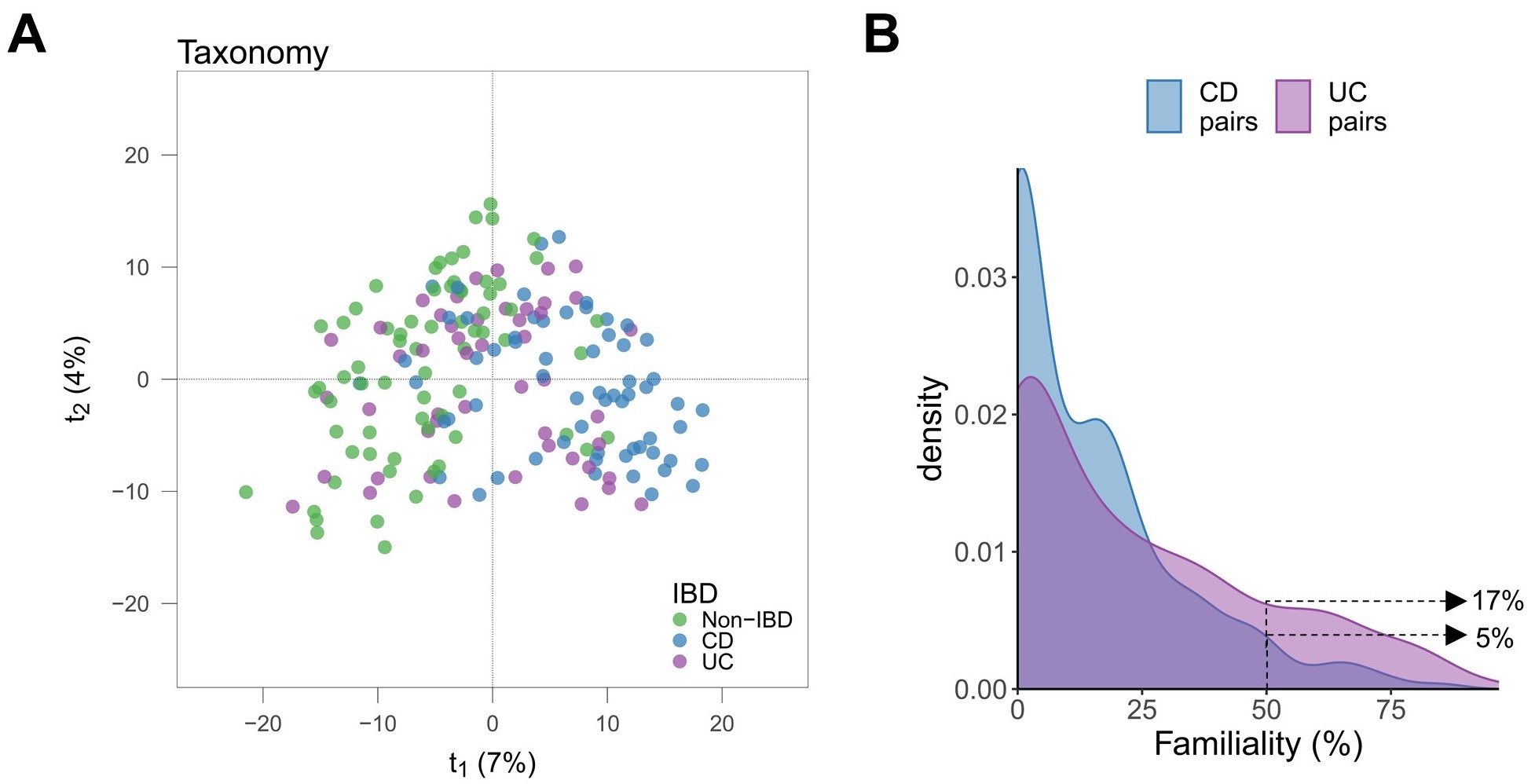 Despite higher disease concordance, gut bacteria familiality in CD was lower than UC, indicating that bacterial composition is an information-rich matrix which captures the heterogeneity of IBD clinical manifestations. Accordingly, we found taxonomic changes specific to IBD presence, but also location, medication, or surgery.