Crohn’s disease (CD) is a complex disease where the gut microbiome plays an important role. One of the established treatments in CD is Vedolizumab (VDZ), an alpha(4)beta(7) integrin antibody. Finding biomarkers to predict therapy response is still a clinical unmet need, since this treatment has shown endoscopic remission in only a third of CD patients. Ananthakrishnan et al. demonstrated a strong relationship between microbial metagenomics signature and therapy response to VDZ in CD based on the metagenomics composition of baseline fecal samples. While the majority of studies focus on fecal samples, mucosa-adherent bacterial signature could bring forth stable biomarkers. In this study, we sought to identify the signature of the adherent microbiome in intestinal biopies to differentiate  responders (R) from non-responders (NR) to VDZ treatment at baseline.

We prospectively collected ileal and colonic biopsies from adult CD patients scheduled to start VDZ treatment during baseline- and follow-up (FU) endoscopies. After median 27 weeks of follow-up, patients were classified as either R or NR based on endoscopic response (≥50% reduction in SES-CD score), steroid-free clinical response (≥3 point drop in HBI or HBI ≤4, no systemic steroids) and/or biochemical response (≥50% reduction in C-reactive protein (CRP) and fecal calprotectin or a basal CRP ≤5 g/mL and fecal calprotectin ≤250 µg/g). Microbiome composition of the biopsies was determined using 16S RNA gene V3V4 amplicon sequencing. We measured alpha and beta diversity using Wilcoxon and Adonis metrics. 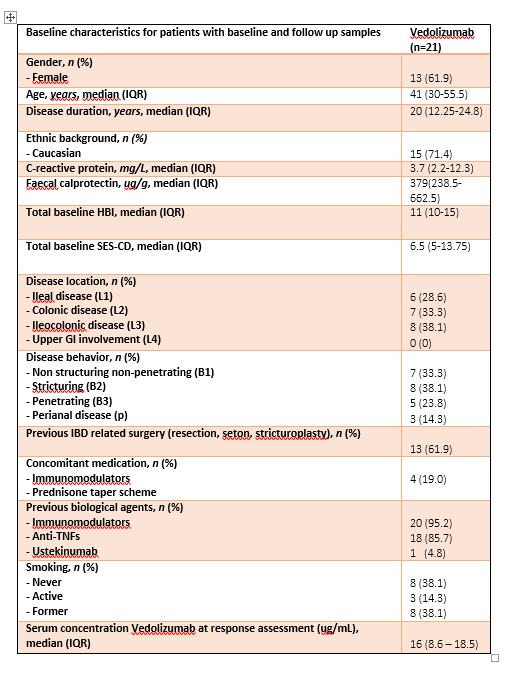 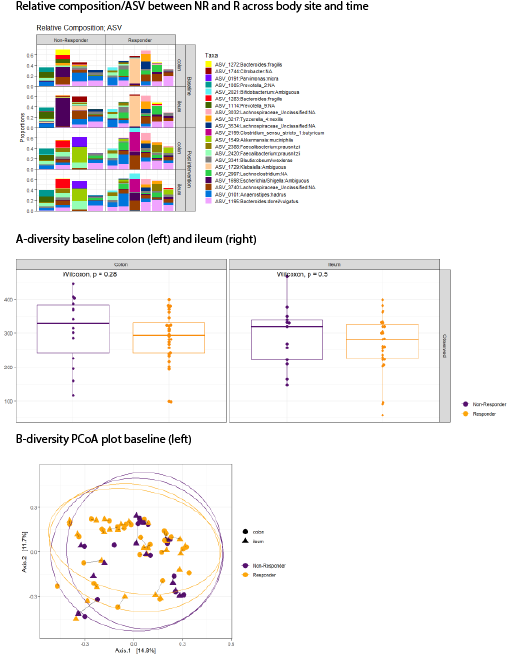 Here, we investigated the microbial signature of VDZ R and NR and demonstrated mucosa-associated microbiome is mostly stable after resolution/non-resolution of inflammation in CD and does not predict response to VDZ therapy. Further analyses on data of infliximab, adalimumab and ustekinumab treated patients, as part of the EPIC Pioneer study, are ongoing.