There is growing evidence of the role of the fungal microbiota in the pathogenesis of IBD, but a definite pattern defining the mycobiome in IBD is currently lacking.

In addition, the variations within the different phenotypes as well as the correlation between fungal composition and disease outcomes has been poorly characterized.

Our aim is to evaluate the fungal composition within the different IBD phenotypes, the changes with disease activity and the association with disease outcomes.

This prospective study presents sequencing of the faecal fungi of 111 individuals: 89 IBD (52 UC/37 CD) and 22 HC. Demographics,medication,Montreal Classification and disease history was collected. A fCalpro>100 was considered active disease.

A subset of IBD patients was followed clinically (6±2 y) and classified as either “Complicated” or “Uncomplicated” based on the need of intensified medication and/or surgery.

Sequencing was done on amplicons targeting the ITS1 region of fungal DNA on a Illumina MiSeq sequencer. Chosen OTUs were compiled taxonomically.Data analysis was performed in R(phyloseq and deSeq2-packages).

In UC, Saccharomyces was predominant in pancolitis (E3), while Penicillium was more abundant in proctitis(E1) and Galactomyces in left-side UC (E2)(Pan.A). At species level, Rhodotorula mucilaginosa was significantly depleted in E3 (p≤0.05)(Pan.B)

In CD, Aspergillus was predominant in ileal affection(L1) while Candida and Rhodotorula genus were more abundant in L2-L3.Patients with structuring phenotype(B2) were depleted of Apergillus and Rodhotorula (Pan.A). At species level, ileal (L1) patients were depleted of Candida tropicalis and Penicillium kudriavzevii. B1 patients had a marked predominance of Candida albicans vs B2(p≤0.01)(Pan.B)

The mycobiome correlation with disease activity is depicted (Pan.C). Candida dublinensis was overrepresented in activity, while Saccharomyces pastorianus was depleted(p≤0.01)

The correlation of the mycobiome with disease outcomes is represented in Pan.D. Penicillium glabrum was significantly overrepresented in patients with a complicated course. The abundance of Candida tropicalis and D. nepalensis was correlated with the need for surgery. 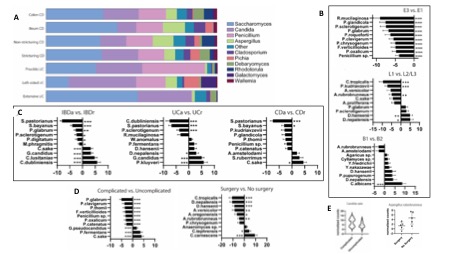 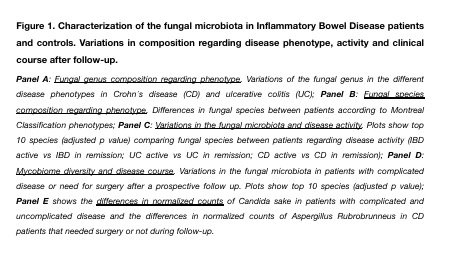 This study shows important differences in the fungal microbiota composition in the different IBD phenotypes.

Some species are clearly correlated with the activity of the disease and worse clinical outcomes suggesting a potential deleterious role.Candida tropicalis was associated with the need of surgery in CD.

This in-depth characterization of the mycobiome serves as a significant addition to the understanding of the role of fungi in IBD.