Gut microbial dysbiosis has been suggested to contribute to pathogenesis of inflammatory bowel disease (IBD). Vedolizumab (VDZ), an α4β7 integrin blocker, has been used as an effective agent for patients with IBD. However, effect of VDZ on gut microbiome and its relationship with efficacy outcomes are still unclear. We investigated gut microbial change in patients with ulcerative colitis (UC) during VDZ treatment.

Patients with UC were prospectively enrolled and were given a 300 mg infusion of VDZ at weeks 0, 2, and 6 as an induction therapy and then every 8 weeks as a maintenance therapy. In cases of insufficient response, the interval of maintenance therapy was shortened to every 4 week infusion. Faecal samples were collected at weeks 0, 14, and 54 and 16S rRNA gene microbiome profiling analysis was performed. Clinical remission (CREM), clinical response (CRES), endoscopic mucosal healing (MH) and biochemical response (BioRES) were evaluated. Compositional differences in microbiome were analysed according to CREM, CRES, MH, and BioRES at weeks 0, 14, and 54.

Faecal samples were collected from 27 patients and patients were classified according to their outcomes (Table 1). In the analyses regarding species richness (ACE, Chao1, Jackknife, The number of OTUs) and diversity indices (NPShannon, Shannon, Simpson, Phylogenetic Diversity), no significant difference was observed among groups at weeks 0, 14, and 54. There were no significant changes in microbial composition at week 14 and 54, respectively compared to basal level. However, compared to baseline, relative abundance of genus Prevotella showed significant differences between groups which achieved normalsation of C-reactive protein or not (p=0.0394) (Figure 1). In the linear discriminant analysis effect size (LEfSe) analysis, the genus Actinomyces and the species Actinomyces odontolyticus group increased in patients who had no response at efficacy outcomes (achievement of clinical remission, achievement of clinical response, achievement of endoscopic mucosal healing, normalisation of C-reactive protein, and normalisation of faecal calprotectin) at week 14, compared to week 0 (Fig 2A). The genus Clostridium_g24, the species Paraprevotella_uc and PAC001224_s were also significantly increased in the same patient group at week 54 (Fig 2B). 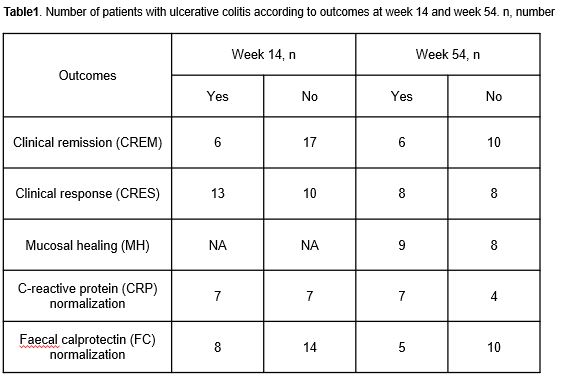