Role of Foods in Crohn’s Disease: Impact on Inflammation and Recovery

This Symposium was sponsored by Nestlé Health Science

Diet is a significant factor in the development of Inflammatory Bowel Disease (IBD) and management of the condition. The Crohn’s Disease Exclusion Diet (CDED) has been shown to be effective in achieving remission, but could it be used more widely?

Increased fibre intake is a key element of CDED, but does it always have a beneficial impact? Recent studies have investigated how CDED impacts the microbiota and whether food additives could contribute to the development of IBD.

Recent Findings on the Use of CDED in Clinical Practice

CDED is used as a first-line treatment for paediatric patients. Could its use be extended into maintenance phases, and could CDED be used more widely for adult patients?

Children with moderate small bowel disease may be treated with a dietary intervention such as exclusive enteral nutrition (EEN) or CDED. For paediatric patients with severe or extensive small bowel disease, EEN may be used [1]. Recent findings suggest that CDED could be an effective approach for both children and adults.

CDED is effective in inducing remission in paediatric CD

CDED has been shown to be effective in inducing remission in paediatric CD [2]. CDED involves introducing more fruit and vegetables into the diet and removing foods such as animal fat, dairy, red meat and additives that are commonly found in a Western diet.

CDED + partial enteral nutrition (PEN) has been found to be better tolerated than EEN and also to be superior in sustaining remission and reducing inflammation at week 12. Moreover, CDED+PEN is associated with a reduction in Proteobacteria and intestinal permeability.

CDED for maintenance of remission in children

Use of CDED in adult patients

In an open label, pilot randomised controlled trial (RCT) [3], 44 adults with mild to moderate CD (HBI 5–14) were given either CDED or CDED+PEN. Almost two-thirds (63.2%) of CDED+PEN patients and 38.2% of patients with CDED alone were in sustained remission at week 12. Overall, both dietary interventions resulted in significant improvement in inflammatory markers, including faecal calprotectin.

For more severe cases or those in which CDED cannot be initiated immediately, a two-week course of EEN followed by CDED+PEN has been shown to be effective.

A study by Niseteo et al. provided real-world data on the comparative efficacy of CDED+PEN and EEN in inducing remission [5]. Of 61 children, 42 (68.9%) achieved remission, including 27 of 41 (65.9%) who received EEN and 15 of 20 (75%) who received CDED+PEN. There was no significant difference in the failure of nutrition therapy between the two groups. This shows that CDED+PEN has comparable efficacy to EEN therapy in inducing remission in children with CD.

Before beginning CDED, a dietitian should carry out a nutritional assessment to identify and address any deficiencies. Dietitians play a critical role in supporting patient dietary choices and follow-ups.

CDED+PEN has been established to be an effective treatment for the induction of clinical and biochemical remission in children and shows a better tolerance rate than EEN.

CDED+PEN may be considered a treatment option for adults with mild to moderate CD. For more severe cases, a short course of EEN followed by CDED+PEN might be considered.

How do Microbes Play a Role in Inflammation and Recovery?

Which species of bacteria are linked to CD?

Some species of bacteria, such as Proteobacteria, are elevated with active disease, whereas others are associated with suppression of inflammation. Metagenomic, metatranscriptomic and stool metabolomic profiles are affected in IBD.

Early effective treatment could be the new paradigm

The established practice is to attempt to extend the period between bouts of inflammation in order to prevent bowel damage. A more proactive way of managing disease after first diagnosis could be to use dietary management, sometimes in combination with medical treatment.

What does metagenome analysis tell us about CDED?

A metagenome analysis was carried out, looking at all sequence data from 54 children, participating in a CDED RCT [2], Verburgt and Dunn “submitted for publication”. All of the children were on CDED+PEN or EEN, in clinical remission at week 6 (≤PCDAI 10), including:

Diet-induced remission and the metabotype

Diet-induced remission is associated with a shift in metabotype towards that of healthy controls. Over time, the metabolic capacity of the microbiome changes from a disease-associated microbiome metabotype towards a healthy metabotype. Analysis by Ghiboub et al. [submitted for publication] revealed that between week 0 and week 6 of CDED+PEN there was a change in individual metabolites, with kynurenine in particular being reduced by dietary therapy.

Dietary patterns matter in terms of risk and course of disease. Analysis of metagenome and metabotype can help to elucidate the impact of nutritional therapy on the microbiome. CDED sustains microbiome change, whereas EEN is associated with a rebound effect.

How Do Food Additives Play a Role in Inflammation?

The intestinal microbiota can have both beneficial and detrimental roles: they protect against pathogens and help mature the immune system but can also be associated with intestinal inflammation and metabolic deregulations. Could food additives drive this inflammation?

How do dietary emulsifiers impact the microbiota?

Dietary emulsifiers are commonly used by the food industry to improve texture and stabilise emulsion. The most common emulsifiers are not permitted under many dietary interventions, including CDED.

In a healthy intestinal microbiota, a sterile mucus layer is maintained over the epithelium. Inflammation occurs when bacteria cross this layer. Emulsifiers [carboxymethylcellulose (CMC) and polysorbate-80 (P80)] have been found to encroach into the mucosa. Dietary emulsifiers also alter the host–microbiota interaction, promoting the expression of molecules such as flagellin and lipopolysaccharide that stimulate inflammation.

A preclinical experimental study demonstrated that CMC and P80 induce a high rate of severe colitis [10]. Feeding emulsifiers in the presence of microbiota was associated with development of intestinal inflammation while this was not the case in a germ-free environment.

Research has shown that certain bacteria appear to be resistant to dietary emulsifiers while others are susceptible and respond with greater inflammation and metabolic deregulation.

Functional research on emulsifiers in humans

In a human study, one group of patients maintained an additive-free diet for four days, while another group followed an additive-free diet plus intake of 15 g CMC per day [11]. Stool samples and colonic biopsies were collected and assessed at different time points. The results indicated that consumption of CMCs impacts human microbiota composition and reduces microbiota diversity. The CMC arm of the study showed rapid alteration of faecal metabolomes once CMC was introduced in the diet. For most participants in the CMC arm, CMC did not drive microbiota encroachment, but a small number of patients appeared to be CMC sensitive and experienced microbiota penetration of the normally nearly sterile mucus layer. This suggests that some individuals may be more susceptible to the dysbiosis-mediated inflammatory effect of emulsifiers.

What is the role of other additives?

Many other additives are added to food, often in particular groupings. A recent study used minibioreactor arrays (MBRAs) [12]. to assess the impact of various food additives on human microbiota [13]. The results showed a high level of heterogeneity regarding the impact of dietary emulsifiers on human microbiota composition and function. Interestingly, some emulsifiers, such as soy lecithin, appear to have no detrimental effect on the microbiota.

The commonly used emulsifiers CMC and P80 are associated with intestinal inflammation and are not permitted under IBD dietary interventions.

Some individuals seem to be CMC sensitive while others appear resistant.

Some emulsifiers, such as soy lecithin, appear to have no detrimental effect on the microbiota and could be a viable alternative.

How Do Fibres Play a Role in Inflammation and Recovery?

Fibre is known to play an important role in IBD and the maintenance of gut homeostasis, but not all fibres function in the same way. What does the evidence tell us about the complex role of fibre?

What does fibre do?

When fibres are not digested by human cells, they are fermented by microbes within the gut and byproducts such as short-chain fatty acids (SCFAs), including butyrate, propionate and acetate, are produced

Large-scale studies in humans have established that diet plays a key role in the development of IBD [14, 15]. Low fibre intake has also been linked to IBD [16].

Dietary guidance for IBD patients encourages consumption of more fruit and vegetables and removal of additives from the diet. However, many IBD patients report that their symptoms increase with enhanced intake of fibre, and therefore they choose to avoid fibre [18]. It is worthy of note that various fibres contained in different foods may differently impact microbial composition and function [19].

The possible mechanism for the detrimental impact of dietary fibre

It has been hypothesised that patients with IBD have dysbiosis, which prevents them from efficiently fermenting certain fibres.

This was evaluated in an ex vivo study testing biopsies from over 100 children with and without IBD in the presence or absence of fibres [20]. FOS promotes interleukin-1β (IL-1β) secretion in biopsies from patients with active IBD but not in those from healthy individuals.

To assess the role of microbial environment, patients’ luminal washes were used. Inulin and oligofructose (FOS) were pre-fermented with bacteria and were then tested in macrophage cultures. Incubation of microbial communities with FOS suppressed IL-1β secretion by macrophages collected from healthy subjects, but increased IL-1β secretion by macrophages collected from active IBD patients.

There was a negative correlation between patient consumption of FOS and the ability of the biopsies of those patients to respond to the fibre ex vivo. This suggests that patients who were avoiding fibre had an increased inflammatory response.

Fibre may play a more complex role in IBD than previously recognised. Current data suggest that the response to fibre is influenced by diet, microbes, the gut barrier, immune cells and active inflammation.

The key message should remain that fibres are good for gut health and most patients should be consuming fibre. However, caution should still be made in advising fibre as different types of fibre may have different impacts on microbiota and inflammatory response. 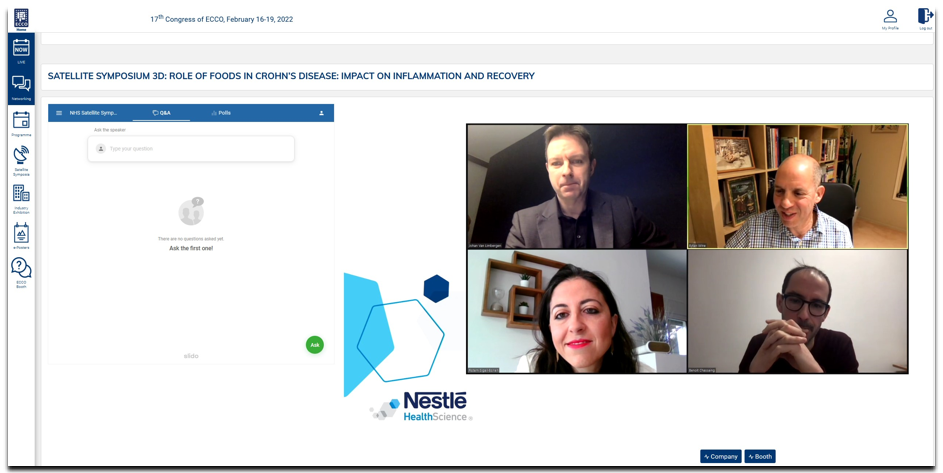 Disclaimer: This programme is not affiliated with ECCO.